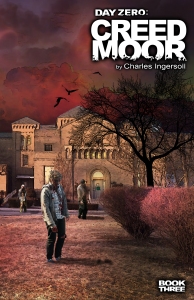 My name is John.

I was a Marine Corps sniper once. Now it’s a bit harder to know what I am. A series of shadowy events beyond my control have left me as something less than human… or, maybe, something more.

The head of Roanoke & Raleigh had spent considerable resources to hunt us down at the museum. Holding some of my people hostage, injecting another with a capsule-sized bomb set to detonate in forty-eight hours, and teaming me up with a woman from my past I had thought long dead, the Man in the Black Suit did all he could to secure my cooperation to go out on one more mission.

Can we all work together to find and exfiltrate this new human target from the dozens of buildings and hundreds of acres of the Creedmoor Psychiatric Institution—a crumbling mental hospital complex? Can I get the Man in the Black Suit’s prize back before I lose the people I care for? Or will I lose everything I hold dear in the process… including myself?

The third installment of the ongoing Day Zero zombie apocalyptic series is here!

Join Marine Corps sniper Sgt. John Walken as he, Jude, Sean and the others find themselves captured by the corporation that experimented on John while he was still serving his country. Now, the real Man in the Black Suit seems to hold all the cards as he forces John to take on a mission to hunt down someone that the head of Roanoke & Raleigh believes is worth spending all available resources to retrieve.  Can John bring this quarry back alive while keeping his own people safe from harm?